So I made hundreds of pierogies on the weekend, and am presently baking gingerbread on a gorgeous October day with all the windows open. So naturally, of course, I’m posting the recipe for French Canadian Split Pea Soup. A) because my pierogy bitch from the weekend asked for it and B) that’s just the way I roll.

I know, I know, I mostly post recipes for sweets and baked things, but I did a batch cook last weekend, and this was the ‘also ran’ that I made on the back burner while the minions were busy stuffing pierogies. I’ll go back to posting sweets as soon as I remember how I made the pumpkin spice whoopee pies last year.

With the weather getting cooler, this is a nice recipe to have in your pocket, and it doesn’t take as long as you might think, and is as close to effortless as home-cooking gets. This is another one that will feed a small country for less than $10 worth of ingredients. If you own a big canning pot, double the recipe and freeze it in whatever sized portion you’ll use. Normally I’d post a picture here, but this was immediately distributed among six different households, and was gone before I could get Twitter to play ‘Marco Polo’ with me for long enough to help me find my cell phone, which is also my only camera.

Because French Canadian Split Pea Soup, when correctly made, looks like throw up anyway.

You’ll just have to trust me. This recipe is both so easy it barely qualifies as cooking, and delicious.

Not everything worth having is pretty to look at. 😛

If you happen to have a ham bone, this is a great use for it. Add it to the soup when you add the broth, and simmer it. Pick it out after an hour or two and salvage any useable meat, and return that to the pot before discarding the bone. (I like to stud mine with cloves) Otherwise a cup or two of chopped leftover ham is a lovely addition.

Add oil to large stock pot and heat. Add chopped garlic, onion and carrot and sautee until onion clarifies.
Rinse the peas in a colander, and add to pot. Add chicken stock, ham and ham bone if using.
Add bay leaves, and turn to low heat. Stir, cover and ignore over low heat 2-3 hours until peas are soft and incorporated. Salt and pepper to taste. May thicken on standing/refrigerating. If it turns into a brick, add more chicken stock or water to the pot when reheating. It’ll still be wonderful. If you’re like me, you’ll serve with home-made bread or buttermilk biscuits, but any crusty bread is good.

Edited:  HA!  Found a photo from the last batch!  Told you it looked like throw up! 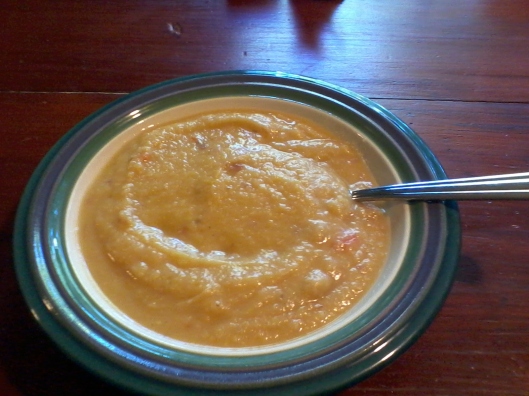 Other Jenns I love