In my own head at least, I’m the world’s least sentimental person. Years of frequent moving in my misspent youth taught the hard lesson that anything you get attached to can be lost, used against you, or taken from you. Even if you do manage to hang on to something special, you’re just going to have to keep moving it. The more attachments, the heavier the load.

So when I had to suddenly put my big cat down yesterday, I was rudely shocked to discover how crushed I was by the loss of a cat that I’d become ridiculously attached to. After all, she was over sixteen years old, and we all knew she was sick, and the world certainly isn’t facing any shortage of cats. She’d always had a difficult personality, and was, in fact, adopted because I have a pathological tendency to fall in love with the ugly, damaged, unwanted and unlovable creatures that nobody else wants. Big Cat was an ugly kitten, left to become an ugly young cat after all of her other siblings had been adopted. She had chronic stomach problems even as a kitten, more whiskers on one side of her face than the other, making her look lopsided, was freakishly huge, even as a kitten, and had a hopelessly bad attitude that she never outgrew. It was love at first hiss.

So nobody was more surprised than I was to find that none of this mattered while I was stroking her ears for the last time and watching the lights slowly go out for my cantankerous kitty for the last time, and feeling totally devastated, while the vet tried not to look at me, and my husband stared very hard at a spot on the floor.

Artists paint when emotion moves them. Musicians make music. I find the same comfort in my kitchen, and newly this year, my garden. The active meditation that both afford is peaceful, and making something from nothing appeals to me. Especially if it’s something that can be shared. So for no good reason other than the comfort of doing it, I spent the afternoon turning summer’s constant nuisance crop, zucchini, into something even people who hate zucchini love. I made zucchini fritters.

My grandmother used to make them every summer at the cottage, and the smell of them cooking is one of those childhood sense memories that always makes me happy. I’ve changed the recipe to suit my own tastes over the years, but the foundation was hers.

Makes 3-5 dozen. You can easily halve the quantities, but WHY? People always have too much zucchini, and you can never have too many doughnuts. Also, zucchini lovers proselytize zucchini haters, hoping to convert them. This is a good recipe for doing that.

5 cups all purpose flour (use dipping method)
1/2 cup cornstarch
2 tsp baking powder
2 tsp kosher salt
2 tsp ground nutmeg
2 tsp ground cinnamon
2 cups sugar
2tbsp unsalted butter (let it come to room temperature in the bowl of your mixer, or in a large mixing bowl while you collect the other ingredients)
2/3 cup milk
2 cups grated zucchini (about two small) Don’t let your zucchini grow too big unless you plan to stuff them. Otherwise about 8″ is good for picking. Otherwise they become tough, and can get bitter
2 large eggs
2 large egg yolks
Canola oil for frying (I buy it in 4L jugs)
2 tsp lime zest

I’ve assumed a stand mixer, otherwise use an additional large mixing bowl where I reference the bowl of your stand mixer. I no longer have the strength in my hands to manually mix stiff batter, but anyone with two working hands can do perfectly well with a little elbow grease and a wooden spoon.

In a large mixing bowl, combine the flour, the cornstarch, the baking powder, the kosher salt, the nutmeg, lime zest and the cinnamon. Stir to combine.

In the bowl of your stand mixer (or your other large mixing bowl) dump the sugar into the butter, and beat with the paddle attachment until it looks like crumbs. Add the eggs, and mix at medium until it looks like a soft, yellow batter. Add the blast shield, and then spoon in the dry ingredients, the milk and the zucchini. Scrape the sided often, since I find with the paddle if I miss this, I’ll end up with an unmixed layer on the outside of the bowl, and it’s a pain in the hoop to clean and messes up the recipe, since half the dry ingredients remain unmixed, as concrete on the side of the bowl.

Once combined, fill a deep frying pan with your favourite cooking oil and set to medium heat. Don’t use olive oil for frying sweets. 1. They’ll taste like olives. 2. Olive oil burns at a much lower temperature. Use canola, vegetable, safflower or peanut.

Go for a smoke, surf the internet for a bit, flip a load of laundry, or in my case, console the surviving cat, who has been wandering from room to room looking for his missing companion. Give the oil time to get hot.

Once your oil is hot (you’ll know because a small bit of the batter dropped in will boil and bubble) drop rounded teaspoonfuls of batter in, and cook approx 2-3 min per side. Look for bubbles around the edges, like you would if cooking pancakes, prior to flipping. Each side should be golden. If they’re cooked through, the side facing down after you flip them should begin to split, just like a loaf of zucchini bread will split along the top when done.

Drain on a wire rack, under which you’ve placed waxed paper, paper towel, or both, because you’re not into cleaning your countertops with a putty knife.

Mix the lime zest, icing sugar, lemon extract and enough water to form a thick glaze. Thin enough to qualify as a liquid, thick enough to stick to your spoon. While they’re still warm, dip the fritters, both sides, and return to your wire rack until glaze is set. Lick the bowl while nobody is looking because it’s too good to waste, but irresponsible to eat on toast.

Try not to eat them all before you get to share them with at least one zucchini hater. They really are delicious. 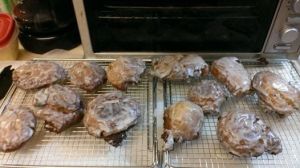 My Tweets
Join 32 other subscribers

Other Jenns I love